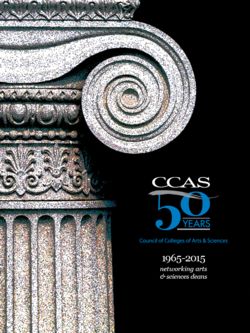 Academic leaders of arts and sciences colleges celebrated the 50th anniversary of the Council of Colleges of Arts and Sciences at a gala at the National Press Club in Washington DC in 2015.

This book celebrates the sense of belonging and of a shared world view of CCAS members and highlights the value of CCAS.

Included are personal narratives of all past CCAS presidents, essays on life in the liberal arts, as well as an infographic and timeline.

An important, if quiet, subtext of the anniversary celebration was the genesis of CCAS as a professional organization: a move—some may call it revolutionary—in which a number of risk-taking deans, walked out of a NASULGC meeting in the mid-1960’s, in protest over a structural move that would limit the role and quiet the voice of those advocating for arts and sciences in higher education. This foundational event is part of the DNA of CCAS and provides an ongoing common polemic in our dialogue with each other, with students and parents, and with internal and external publics.